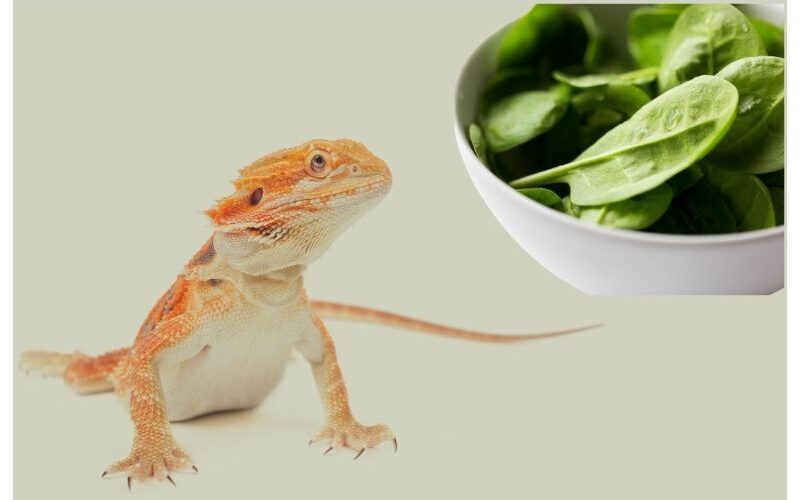 Spinach is an increasingly popular green that has immense health benefits. It is a leafy green vegetable and is considered very healthy, as it is full of nutrients and antioxidants. Eating spinach may benefit eye health, and has many more advantages. It is recommended by doctors and nutritionists but is spinach safe to feed to a bearded dragon? Or should it be kept strictly out of their dinner bowl?

Here we present some of the facts supported with research provided by vets and nutritional experts to help you make the right dietary decisions.

Is it safe for Bearded Dragons to eat spinach?

Since time immemorial, spinach has been considered as a superfood for humans. It is rich in fiber, antioxidants, minerals, and vitamins. Humans can eat spinach every day to boost their health, but that’s not quite the case for bearded dragons. Yes, bearded dragons can eat spinach, but there is a catch associated with it. Since the spinach leaves contain many oxalates, it should only be fed on special occasions and that too in less amounts. This is primarily because the high oxalate content in spinach leaves are considered unhealthy for bearded dragons. High oxalate content results in binding the calcium atom, thus preventing it from being absorbed by the bearded dragon body. Eating excess spinach can make the bearded dragons sick and can even prove to be fatal for them.

Is spinach good for Bearded Dragons?

Feeding spinach to bearded dragons is perfectly acceptable on rare occasions (i.e., a few leaves in every few months). But if the bearded dragon has underlying health concerns, it would make sense to take an expert opinion from the vet first.

There are various components that make up spinach. Knowing about these can really help you decide whether or not spinach is the right veggie for your dragon.

Bearded dragons do not thrive on a high-sugar diet. As a matter of fact, bearded dragons on a high sugar diet on a daily basis can suffer from obesity, diabetes, fatty liver disease, and even life-threatening heart failure. Spinach contains virtually no sugar, thereby making it a heart-healthy option for the occasional salad.

Bearded dragons should avoid eating phosphorus-rich foods – especially foods that contain more phosphorus than calcium. It is recommended that bearded dragons diet should at least have the calcium to phosphorus ratio of 1:1, if not higher. It’s much safer for dragons to regularly consume foods with a calcium to phosphorus ratio of 1.1 or higher, so the amount is at least balanced. This is since phosphorus binds with calcium and prevents it from being absorbed into the bearded dragon’s blood. Since calcium is a vital mineral for the bearded dragon’s survival, long-term consumption of phosphorus-rich foods can be harmful. It can result in metabolic bone disease (MBD) and even death.

The abundant presence of the following vitamins and minerals in spinach makes it a superfood for both the bearded dragons and humans.

The following list presents the Nutritional Information For Spinach Per 100g. These details have been taken from the USDA (United States Department of Agriculture).

How to prepare spinach for Bearded Dragons?

One must remember the basic simple fact that a bearded dragon’s nutritional needs are very different from those of humans. So, when one decides to add green spinach in a bearded dragon’s diet, one must ensure that it should be organic if possible.

Can a bearded dragon eat spinach every day?

No, it is not safe for bearded dragons to consume spinach on a daily basis as it is high in oxalates. However, because of its other benefits, one must try to mix up the diet and provide different nutrients from different food items to give bearded dragons a wide nutrient profile. Since the size of the reptile’s stomach is small, it is best to try and feed as many nutrients before they are full. Feeding spinach twice or thrice every month mixed with other staple and highly nutritious greens and veggies would give a great platform for a healthy bearded dragon.

Should spinach, and other beet greens and Swiss chard be fed to bearded dragons?

Spinach, Swiss chard and beet greens should be fed sparingly as they contain oxalates that can bind calcium and other minerals. Such greens should be fed in small quantities as the oxalates present in these greens bind calcium and other trace minerals, preventing their absorption by the dragon’s body. Hence diets consisting of these greens can lead to nutrient deficiencies in the long run. In addition, caution should also be exercised when feeding kale, cabbage, and mustard greens; as these vegetables contain goitrogens – an excessive intake of these might lead to hypothyroidism.

Thus we can conclude that even just a few bites of nutrient-packed spinach can give a tremendous boost to bearded dragon’s health.