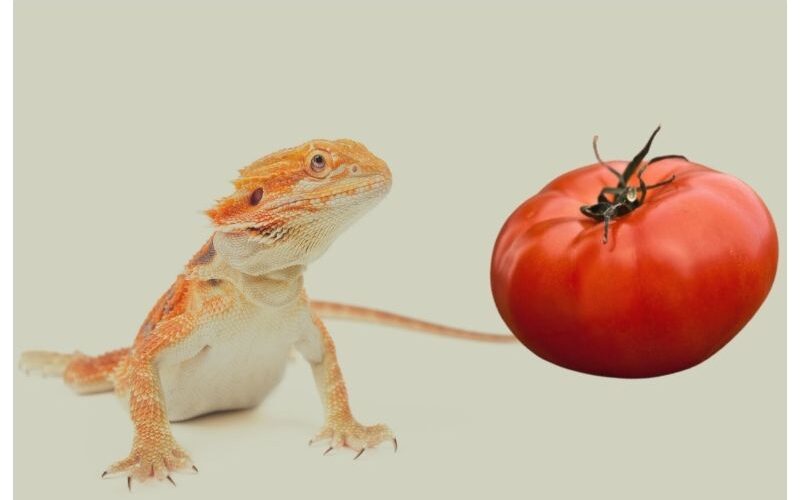 At times it becomes difficult to know what healthy foods to feed bearded dragons. Commonly available fruits such as tomatoes are often one of the first considerations. As the nutritional requirements of a bearded dragon are significantly different from that of us humans, this has made owners come up with the question if bearded dragons can eat tomatoes safely?

This post covers the detailed information in this regard, researched from veterinary nutritionists and experts in reptile care, to come with facts about how healthy tomatoes are for bearded dragons.

So can bearded dragons eat tomatoes?

Are tomatoes good for Bearded Dragons?

Experts from VCA have listed tomatoes as one of the fruits which can be safely given to the bearded dragons. VCA-Hospitals recommend that only 10% of a bearded dragon’s plant-based diet should come from fruits like tomatoes. This is because most fruits including tomatoes are nutritionally poor when compared to leafy greens and hence should play a substitute role in a bearded dragon’s diet. 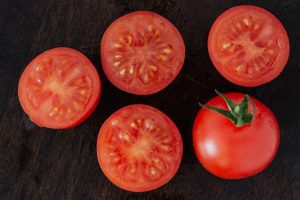 Listed below are a few key benefits of providing tomatoes to bearded dragons.

a) High in Vitamin A

Tomatoes have Vitamin A in abundance. A USDA conducted study has revealed that 100g of tomatoes have 75µg of Vitamin A. Vitamin A is vital for a good vision, a good immune system and it is also beneficial for the reproductive system. A word of caution should be noted that excess vitamin A can cause toxicity, which in turn can cause illness to bearded dragons.

b) Low in sugar

Since tomatoes are low in sugar when compared to other fruits, they can form a part of the diet of the bearded dragon. Excess sugar can lead to obesity, teeth and gum issues, diarrhea, and sickness. Tomatoes have 2.63g of sugar per 100g, as compared to apples, which have 10.1g per 100g.

Tomatoes are naturally low in oxalic acid or oxalates as compared to green vegetables. They contain about 50mg of oxalates per 100g, whereas spinach has 970mg per 100g. They can prevent the absorption of calcium and other minerals in bearded dragons if tomatoes are consumed in high volumes.

Below are the benefits and possible disadvantages of feeding tomatoes to your bearded dragon. This nutritional information chart can help to determine if tomatoes are lacking or abundant in vital nutritional elements such as calcium and other vitamins.

*Nutritional Information Of Tomatoes Per 100g

How to Feed Tomatoes?

Most fruits, greens, or veggies that are offered to bearded dragons require slightly different preparation. Find below a few quick steps to guide you through the process of feeding tomatoes to your dragon.

It is recommended that bearded dragons should not be fed tomatoes on a daily basis, as the tomatoes lack calcium and have poor phosphorus ratio. No doubt, tomatoes have Vitamin A in abundance, one must note that the number of cons outnumbers the number of pros.

Taking this into consideration, experts recommend that only 10% of your dragon’s diet should come from veggies like tomatoes. And hence bearded dragons should be fed with tomatoes around once a month.

Growing baby bearded dragons need all kinds of nutrients for healthy development. Due to the presence of high percentages of nutrients in insects and plant-based foods, they should be part of their daily diet.

Considering all the scenarios, baby bearded dragons can eat tomatoes but they should only be offered in small options as their stomachs are small and large portions of tomatoes on a regular basis would take the place of more nutrient-dense foods.

How does low calcium affect the bearded dragon’s health?

The low calcium content in tomatoes can lead to metabolic bone diseases in bearded dragons. Thus it is crucial that calcium-rich foods be included in the diet so as to keep the bones healthy.

What is the ideal phosphorus to calcium ratio in tomatoes?

Tomatoes have poor and unhealthy phosphorus to calcium ratio. Since phosphorus binds to calcium and prevents it from being absorbed in the body, it is extremely important that a diet should not include too many foods that are high in phosphorus and low in calcium. It is recommended that calcium to phosphorus ratio should be of the order of 2:1 to prevent the onset of metabolic bone diseases (MBD).